The major function of drainage systems on adjourning road is to convey surface water to a collection point. This is to ensure that water is not allowed to collect on the road surface in order to prevent rapid deterioration and inevitable damage. In addition they normally serve to collect waste water from buildings along their path and transport them to the point where they are either treated or dumped. Open drains are common on our roads and streets back here, and unfortunately due to bad (environmental) habits or practices of road users (commuters and passerby), these drainages have become refuse collection channels creating serious blockage problems especially during the rainy season. Constructing underground drainages have the advantage of solving this problem and it generally hold sway as the most efficient and long-lasting drainage type; making it the first choice for developers who are concerned about efficient and cost-effective drainage systems for their estates 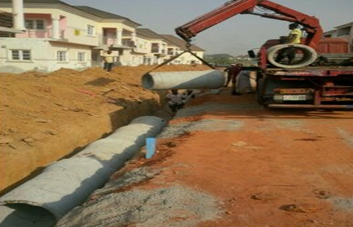 In constructing underground drainages, it is important to first study the terrain and slope relative to the ends or final point of disposal; usually this is done by an engineer or a surveyor using certain equipment e.g. leveling equipment. Then a drainage design is developed using suitable software (e.g. HydroCAD). This design although often undermined is very important because it reveals the sizes, composition and position of all the elements of the drainage system (e.g. Manhole, drain blocks, etc) in a very efficient manner based on the anticipated water flow rates, pressure-forces, energy levels and other relevant factors within the system at any given time.

Then you pre-cast the drainage blocks in a factory or yard on or off site. Reinforced concrete drainage blocks are the commonest in town and reinforcing the blocks must be done in accordance with the structural design in order for it not to fail at any time within its estimated life cycle. Most fabricators are increasingly using spiral distribution reinforcement in drainage blocks with circular cross-section. This is believed to provide a better continuous longitudinal support against tension. The drainage blocks are left for about two weeks to set and gain strength before they are transferred to the point of usage by means of a truck.

Concurrently, setting-out is done on site and points are marked out for all items in the drainage system. Afterwards trench excavation is carried out to the required depth; usually about 2-metres. In case of ground water, adequate effort is made to rid the trench of it, to allow for proper leveling and compacting of the subsoil using a jumper rammer or a good substitute. Depending on subsoil conditions, there may be a need to remove excess poor earth and refill with hardcore and or sharp sand before compaction is done. A layer of concrete blinding up to 75mm is then placed.

The drainage blocks are lowered to their individual points on ground with the aid of a crane and locked into each other at open ends water-tightly and to manholes and other drainage elements. Openings provided on the blocks as entry points are well connected to the surface before the backfilling is done. In some cases, non-return valves and wire filters are installed at those entry points. The earth-fill over and around the blocks are well leveled and compacted to avoid surface depressions. Care must be taken not to allow debris into the drain during construction to avoid blockage.
Signage is placed at surface level to indicate that a drain passes underneath and that’s it!
Posted by Engr. Osaz' at 08:42 No comments: