Why It Is Structurally Wrong To Build Directly On Sand - Engr. Osaz’ ENOBAKHARE

As construction cost rises due to attendant rise in prices of building materials, the trend of building houses directly on sand has been observed to be on the increase especially by unscrupulous developers and contractors. Having carried out an independent monitoring of construction activities in some areas in the Ajah axis of Lagos lately, it became obvious that in order to save cost people have resorted to constructing buildings directly on sand.

The awkward idea been adopted in most of the cases under study is to sand-fill the land, level and compact it with the use of machines and the construct a reinforced concrete strip foundation directly over it without recourse to minimum construction/engineering standards.

They do so very quickly so that before any of the regulatory bodies saddled with the responsibility of building control gets wind of their ill act, they are already on super-structure level at which point it is burdensome to ascertain how the foundation was actually built. 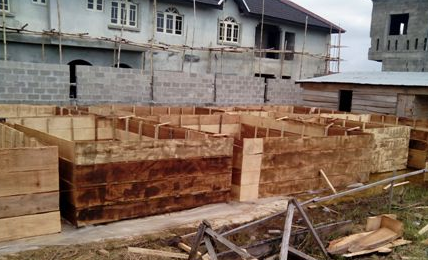 On a particular site, using this vague method the entire foundation including the ground floor slab was put up in one week and by the next week, they were already building up the walls and frame. Dishonest developers thrive in such indecent acts and sell or lease these buildings to unsuspecting prospective buyers who in-turn occupy them or cause others to do so by way of lease/rent too. There is no consideration for lives and properties put at risk of an imminent collapse even as some of the buildings observed are already exhibiting symptoms of instability and sick building syndrome pre-occupancy.

Five years post-occupancy, the building over-settles (or sink) and then tilt in a particular direction. When asked, some of these developers claim that before there will be any major issue with the building they would have recouped the returns on their investment and its left to the new owner to do a repair by way of underpinning as the need arises. To know that some greedy professionals have joined the bandwagon of quacks in delivering such poor structures is condemnable. This act should not be encouraged in any form.

Here are some structural considerations; normally after leveling and compacting operation has been carried out on a sand-filled land it still remains a made-up ground. Although the land becomes stiff at sub-surface levels, this doesn’t in anyway erase the fact that the underlying bad soil (or peat) remains intact and retains its poor attributes. Peats are highly compressible soils and will naturally compress upon the impact of load. As this happen, the building will settle indifferentially, especially during seasonal changes and mass movement of the earth; which occurs at various times of the year.  Such structural anomaly often leads to poor stability of the building and eventually a collapse if unable to bear the load, especially for single or multi-storied structures.

Rising cost of building materials should not be a yardstick to adopt poor construction methods in the construction of buildings and estate infrastructure anywhere. The authorities should not turn a blind eye to such activities that jeopardizes or threatens the lives of people as well as the overall health of the built environment. Project owners and developers should not connive with contractors or builders to manipulate well established engineering prinicples. It is important to select a good contractor for your projects. Yes, there is room for adopting cost-saving methodologies like the use of dry construction methods, cold brick construction, etc but bad construction methods is never the way to go.
Posted by Engr. Osaz' at 11:31 5 comments: